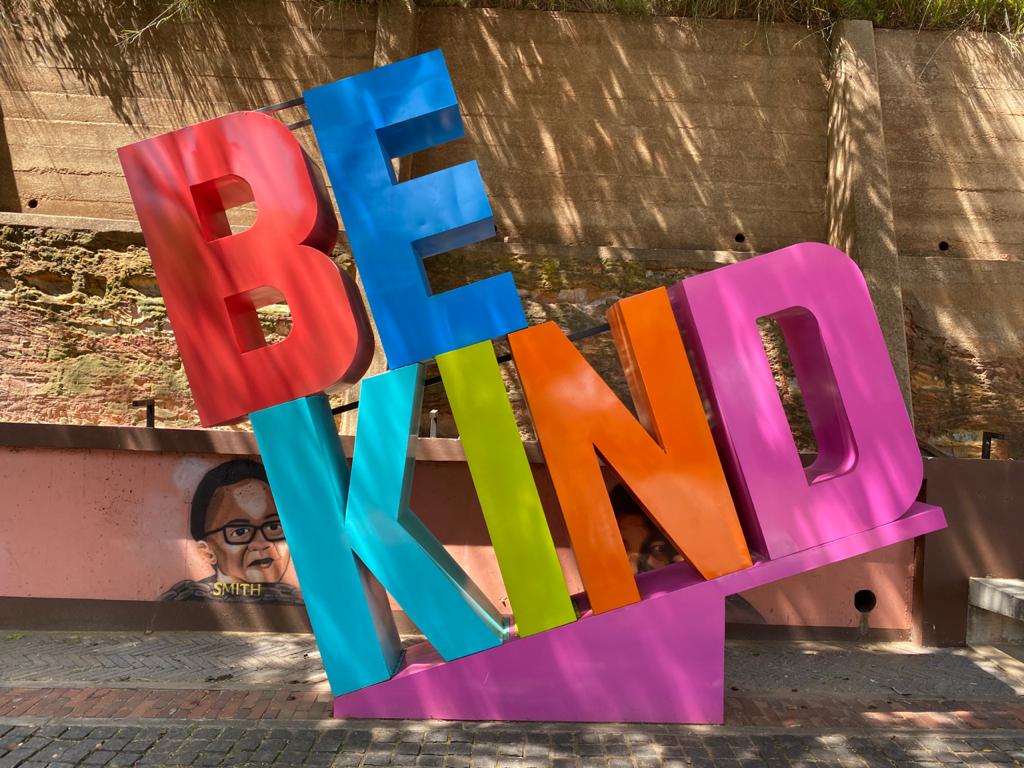 In bright colours and written at an ascending angle stands a block letter artwork.  Perhaps it is less of an artwork, and more of a suggestion for Humanity.  It reads ‘BE KIND’ and it is displayed boldly on the corner of a high energy business and retail hub in Johannesburg, opposite the iconic golden arches of McDonalds.

To my great delight, there is another one standing loudly and proudly outside the Constitution Court against the ramparts of the old fort on the dividing line between Hillbrow and Braamfontein, and its message could not be more simple yet more powerful.

We take time with our Leadership groups under the trees there, just next to the flame of democracy, and it provides in two simple words, both a platform for reflection and the springboard for debate and action. Without getting into all the unkindness this place has seen in its history, the constitutional court stands here as a beacon of hope for a different future, and perhaps the kindest thing it represents now is how it has masterfully challenged the unkind laws of the past, and upheld the new kindness espoused in our Human rights.

A short while ago a good friend of mine launched an initiative for the homeless called ‘Love is a verb.’ Beautiful heart stickers are bought for some pocket change and given to the homeless who in turn are able to sell them to passing motorists as an act of dignified trade rather than one of a desperate begging.

If love is a verb – a doing word which requires action, then surely so too is kindness?

There were two stories this month which highlighted the simple yet profound impact of small acts of kindness.

In the state of Rhode Island, a pizza delivery man by the name of Ryan Catterson delivers a pizza to the Sheely home in West Warwick. The ring video doorbell captures a moving image of two-year-old Cohen running out, after the transaction, to give the man a hug. Mom thinks this is cute, which it is, and posts it on her Instagram page. Ryan gets wind of it and his story unfolds.

While smiling on the outside he has been grieving the unexpected loss of his own daughter Alyssa in the same week, and he speaks of the healing properties of an unsolicited and unscripted hug. He speaks of God, of the Universe and the connection he felt from a two-year-old as a moment of truth with his daughter. And in that moment, he finds some peace in his own internal world of turmoil.

Every student has wanted to hug a pizza delivery man at some point in their lives as a promise to the end of a hungover hunger, but I wonder how many ever do? I never have, though I have thought about it often, and it serves as a reminder that kindness, like love, lies in the action, and not just in the thought.

A second story emerged from the world of sports. Not just any sport – the biggest global sport of football. Not just any league – the most popular league worldwide. At the top of the British premier league is Liverpool, and the man at the helm is Jurgen Klopp. This household name and his club are riding the wave of unprecedented success. The pressure is intense and the demands on his time must be overwhelming.

Jurgen Klopp receives a letter from ten-year-old Daragh Curley who is a passionate Manchester United fan. He asks Klopp to please make sure that Liverpool start losing some games, because this continuous winning streak of his clubs’ bitter rival is making him sad.

Despite the media pressures, the millions of global fans expectations, the training schedules, the travel, the required match focus points and a rare moment for his personal life, Klopp takes time to respond in a privately crafted and personal letter to young Daragh.

In a page of pure genius, and one which should be made compulsory reading for all managers and sports fans alike, he talks of sportsmanship, of responsibility and of respect.

Underpinning all of it lies an act of kindness.

I wonder how many thoughts of kindness have never manifested as acts? How many times I have failed to write the letter of thanks, to stop to help change the tyre, to hold someone’s hand across a busy road, to buy the stickers for the homeless, or even greet the security guard at my next corporate meeting?

Whilst a personal letter from the worlds most recognised manager may not sway the allegiance of a dyed in the wool United fan, a hug from a two-year-old may change someone’s life.

The least we can do might mean the most to someone else?

Previous For we can never forget
Next Leading Remotely

OUR CONNECTION TO AFRICA’S BUFFALO THORN