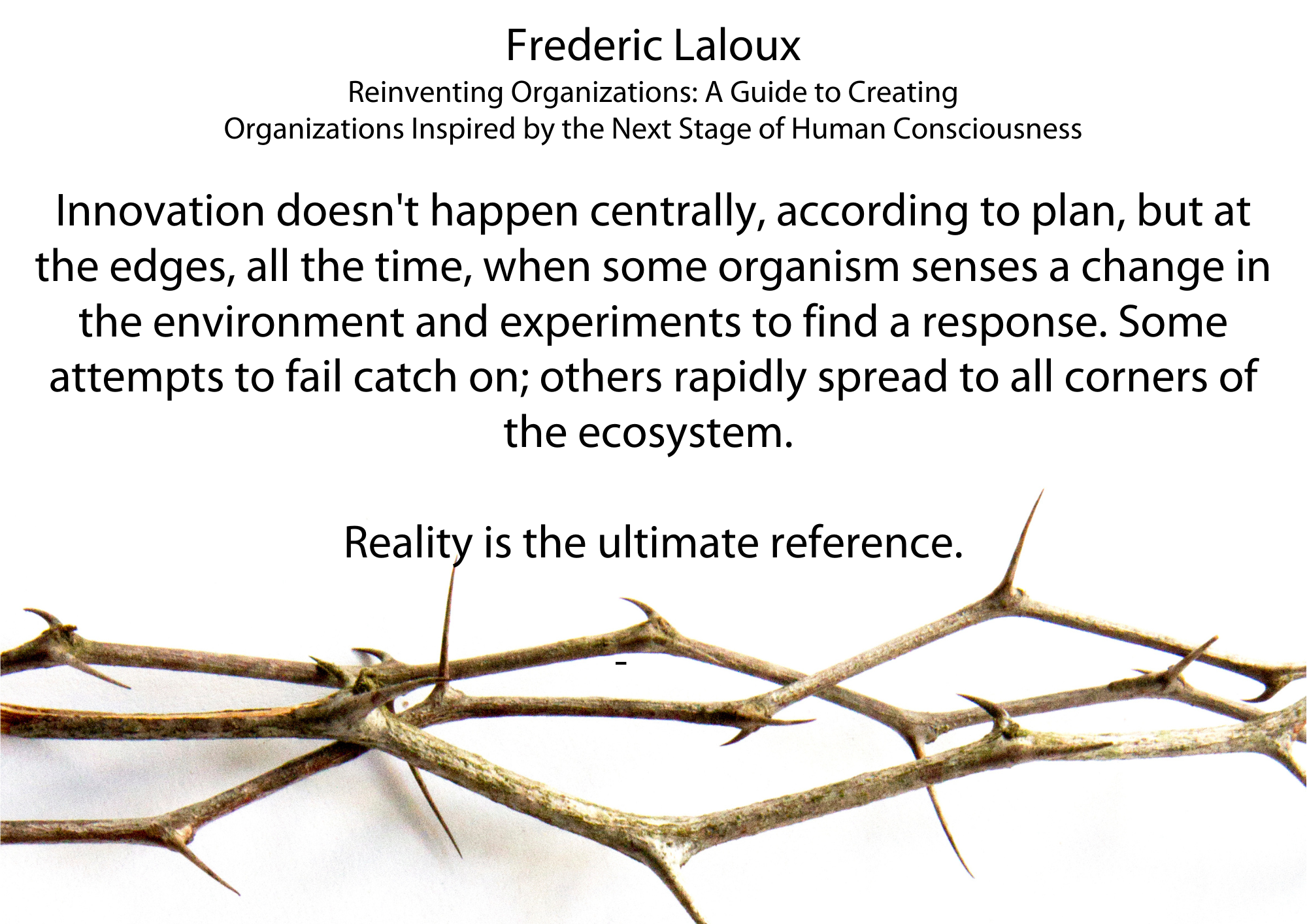 There is something fascinating about the seamless interactions within natural ecosystems.  Like the plants that absorb the sun’s energy and provide a significant source of food for a variety of species.  Or the giraffe that eats the foliage that other animals cannot reach, thus promoting growth for themselves and other smaller animals. Have you ever noticed how a flock of birds in flight seamlessly adapts and flows through the currents in their flight path; or how a herd of elephant unassumingly and collectively tramples through dense bush finding the shortest route to the nearest water?  It just all happens, with no fuss, no politics and no ego-driven competition. Each species does what they do naturally with ease and for a common purpose – to keep their world in flow for themselves and others.

Imagine what the world would be like if we seamlessly adapted to today’s consistently changing currents?  Imagine if networks of individuals operated as a living ecosystem, where everyone’s own strengths and capabilities collaboratively served a collective purpose. Imagine what your world could look like without expectations, recognition, judgement or mistrust.

To say that life today is complex, is somewhat of an understatement.  There are multiple unpredictable events occurring at an unprecedented pace, causing a ripple effect on societies, organisations and people. Living in the middle of such turmoil, naturally triggers instinctive reactive responses in us as human beings.  We naturally respond in defence of the status quo. Simultaneously, this reactive response unconsciously places immense pressure on the internal cogs that are relied on to make these changes happen.  These internal cogs are the people, and are placed under tremendous tension and stress – two ingredients that impact energy, engagement, and performance.

The world is also operating at a very different level of consciousness than it has ever before.  The old ways of leading and responding are no longer creating impactful nor sustainable outcomes. Our world has changed and the need to embrace a new level of thinking is essential.

The power of consciousness, particularly relating to Conscious Leadership and Conscious Organisations is widely written about. Frederik Laloux in his book ‘’Reinventing Organisations’’ has positioned a new organisation, the Teal Organisation. It is about a system of Holacracy which is proving to be a powerful platform for unstructured collaboration.  What these all reference is a higher level of operating that has successfully been practised by a number of entities today, such as families,  institutions, for-profit and non-profit organisations.  These entities are referred to as living organisms as they literally adapt in response to the environment they exist.  There are no ego-related fears.  Here, the connection between an individual’s calling and an organisation’s purpose is discovered, individual strengths are empowered and the abundance of life and possibility is trusted.

And it is the power of Consciousness that makes this possible.  Consciousness has been referred to and understood in a number of ways, from philosophy to science to spirituality. Only recently has there been significant scientific proof of its impact. Consciousness is awareness.  It is an endless energy field that exists within and around everything. It is powerful because it supports the creation of new programs that we choose to run our lives.  This impacts how we show up in our world and experience people, places and situations that we may have typically responded to from an autopilot program that has been manifested over our lifetime.

Autopilot programs limit us. Consciousness allows us the opportunity to consciously create new programs through which we see and experience the world. It invites us to shift our mindsets and patterns of behaviour to a completely new dimension, therefore not being boxed into the old reactive ways of doing, being, leading and living.

Because consciousness is energy, wherever we focus our attention, our energy will flow.  The more energy we spend, the stronger the connections in our brain, the stronger the mental program which ultimately impacts the results we achieve.  There is an unlimited ripple effect from this.  Just like the sun’s energy creating growth from one element to the next.

Operating at this level of Consciousness is unconditional.  There are no titles and there is no ego.  Rather,  there are a number of interconnected self-managed teams or networks, who direct their own targets and operational decisions.  These networks strive to create an environment that nurtures true potential.  In these environments, individuals are invited to bring their whole self; the positive and negative, with no judgement.  There are no ego-related fears and there is a faith in the abundance of life. Individual strengths are fostered and failures are presented as an opportunity for growth and learning. The organisation focuses on what is required for it to function effectively and efficiently, sometimes even at the expense of profit and market share.

This is in stark opposition to traditional organisations that typically follow a pyramid structure, where titles define responsibility, performance measures are key for success and individuals are expected to follow a set of values and competencies whether they agree to them or not. It’s no wonder that Gallup has proven that employee engagement is at one of the lowest recorded levels. 33% individuals are actively disengaged, only 13% fully engaged and 54% merely enrolled.  In fact, in their survey, 71% of respondents claim to not to receive any value from their team.

The operating paradigms of where people are living and where organisations are functioning seem to be out of sync. This imbalance will likely lead to friction within the ecosystems of the corporate world.  We have to evolve the existing systems that run  our organisations, societies and our lives, societies.

So, when operating from consciousness, we can look forward to creating less silos and more collaboration.  Co-leadership exists where feedback for learning is enabled, and accountability for deliverables is co-created.  Where self-managed teams leverage strengths, support weaknesses, share workloads, innovate collectively, learn from failure and celebrate excellence together.

The result:  A collective creation of energy, uplifted performance and optimal operations which exceed any anticipated success.

“This is how nature has worked for millions of years. Innovation doesn’t happen centrally, according to plan, but at the edges, all the time, when some organism senses a change in the environment and experiments to find a response. Some attempts to fail catch on; others rapidly spread to all corners of the ecosystem. Reality is the ultimate reference.”