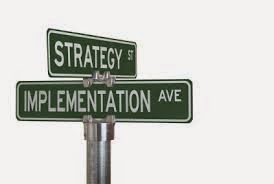 When leaders substitute visions, missions, purposes, plans, or goals for the real work of strategy, they send their firms adrift.

When discussing strategy, executives often invoke some version of a vision, a mission, a purpose, a plan, or a set of goals. I call these “the corporate five” (see exhibit, below). Each is important in driving execution, no doubt, but none should be mistaken for a strategy. The corporate five may help bring your strategy to life, but they do not give you a strategy to begin with.

Nevertheless, they are often mistaken for strategy—and when that happens, real damage can ensue. If the corporate five are the cart and strategy is the horse, leaders who put the cart first often end up with no horse at all.

Before they get to the corporate five, companies need to address five much more fundamental, and difficult, questions. Let’s call them the “the strategic five”:

1. What business or businesses should you be in?

2. How do you add value to your businesses?

3. Who are the target customers for your businesses?

4. What are your value propositions to those target customers?

5. What capabilities are essential to adding value to your businesses and differentiating their value propositions?

Although most companies can articulate a vision (for instance, “to be the leading biotech company”), a mission (“to find and commercialise innovative drug therapies”), a purpose (“to improve patients’ lives”), a plan (“to develop molecule X, enter market Y, and partner with company Z”), or a goal (“to bring three innovative molecules to market by 2025”), few convincingly answer all five strategic questions, especially with one voice across their top teams and down their organisations.

They can’t answer those questions because often they haven’t asked them in a very long time, if at all. Instead, the corporate five have become a mask for strategy. When that happens, the real substance of strategy—making deliberate and decisive choices about where to play and the way to play—is lost. There is no foundation for decision making and resource allocation. Everything becomes important. Indiscriminate cost-cutting and growth become the order of the day and, sooner or later, with no strategy as a guide, a business drifts. Consider Procter and Gamble. It has a mission (“to touch and improve the lives of more consumers, in more parts of the world, more completely”) and a CEO who says he is “totally focused on the plan.” Yet the company is struggling to regain its footing and direction because the strategic five has been lost while the vast, complex enterprise strives to operate in a more volatile economic environment.

IBM, on the other hand, is an example of getting it right. When Lou Gerstner took over the reins of the troubled company in 1993, he famously declared, “The last thing IBM needs right now is a vision.” This was widely interpreted as a statement that execution would be the priority and strategy would take a backseat, at least while Gerstner was busy turning around the company. But he proceeded to redefine IBM’s business boundaries (from computer hardware to hardware, software, and services), value proposition (from best products to corporate solutions), and essential capabilities (for example, from selling to the IT department to selling to the C-suite). In other words, he focused on the strategic five—not the corporate five—to make his elephant dance. Gerstner was as strategic a CEO as they come. James E. Burke, former CEO of Johnson & Johnson and former IBM board director, said of him, “He thinks strategically about everything. I once asked him if he thought strategically about his dog.” Gerstner knew that IBM was suffering from a lack of clear and coherent strategic choices and that fixing this was far more important to the company’s immediate needs than was envisioning the company’s longer-term future. Without the former, there would be no need for the latter.

All this is not to denigrate the role and power of having visions, missions, purposes, plans, and goals. Strategy is the primary tool a leader uses to guide decision making and resource allocation for a business and its people, but the corporate five give the leader a means to excite, focus, inspire, mobilize, and challenge. A vision paints a picture of the future around which your company can rally; a mission articulates an objective that defines what the company is seeking to achieve; a purpose describes why your company exists and gives meaning to what it does and the people who do its work; a plan lays out a set of actions to be undertaken within a certain time frame; and goals define how your success and progress will be measured and evaluated. None of these gives you a strategy, but they do play an important role: They motivate an organization to perform at its very best in the context of that strategy. That is what execution is all about.

Gerstner knew this too. After stabilizing the company and establishing IBM’s strategic five, he did, in fact, create a vision: “To lead big companies into the brave new networked world, IBM will devise their technology strategies, build and run their systems, and ultimately become the architect and repository for corporate computing, tying together not just companies but entire industries.” But, even then, he recognized the need to connect that vision to the strategy (and execution). “Vision is easy. It’s just so easy to point to the bleachers and say ‘I’m going to hit one over there,’” Gerstner told a CNN interviewer in 2004. “What’s hard is saying, ‘OK, but how do I do that? What are the specific programs, what are the commitments, what are the resources, what are the processes in play that we need to go implement the vision, to turn it into a working model that people follow every day in the enterprise?’ That’s hard work.”

If you want to have a bit of fun sometime, just ask your head of strategy or general manager how the corporate five differ from strategy. A typical response will be, “Who cares? Aren’t they all about giving direction to a business? Does it matter what you call ‘direction,’ as long as you have it?” Now, you have an answer. Without addressing the strategic five, your company will lack the foundation and the context for making the choices and allocating the resources that are critical to superior execution. Without the corporate five, your organization will lack the perspective, commitment, and alignment required to perform at its very best.

Previous Without a Job, WHO AM I?’
Next When Nobody (and Everybody) is the Boss