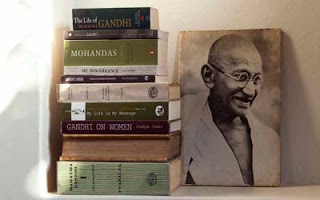 This is the name of Mahatma Gandhi’s house. The one in KwaZulu Natal, South Africa, on the outskirts of Phoenix nestled amongst the bustling settlement of Bambayi. It was burned down in 1985 in the wake of the politically charged Inanda riots, but has been rebuilt and now serves as a largely undiscovered haven of hospitality in an informal sprawl of Humanity.

Our times here are special and sometimes even spiritual, and it provides a space to eat, talk and breathe at a slower pace after the sensory assault of the weekend.

The surrounding community was settling into its Sunday afternoon routines, and as I watched the ritual of weekly washing, I wondered at how Gandhi himself might have sat on the verandah of the Indian Opinion printing press and gazed over the very different scene in front of him over a century ago. What would have been subsistence farming then is now a patchwork pattern of makeshift shelters cobbled together with cables and corrugated iron.

An old Gogo was doing her washing in four shallow plastic tubs and in each one stood a small child stomping out the stains and squeezing the soapy water into every filthy fibre of fabric. Whilst work was taking place, a game was emerging simultaneously, and there was clearly more fun to have four little feet dancing on the denim and then six and then all eight as the leader hopped from one hurdle to another.

A steeplechase ensued and as the waters frothed, the bubbles became snow white beards, and the slippery suds would slide over the edge and lap over into the dusty sand like the stormy seas of a choppy ocean.

As toes became entwined in trousers, there would be spills of the human kind too, and with each fall the hilarity would rise – and with each recovery more mud would end up in the washing than out.

The old Gogo just smiled. Perhaps she was thinking, there will always be next Sunday.

When the menial and mundane turns to muddy magic through imagination, something supernatural is at play, and watching life unfold in this way is simply enchanting.

The process may be muddy at first, but nothing which a sheet of reject wrapping won’t sort out for next Sunday’s washing ritual.

Changing a chore to a chortle swings a scowl to a smile and Grandchildren influence their Grandparents.

I wonder how often I see some of the work I do as a necessary evil to get to the other side, when perhaps just getting there would be far more fun in the play?

If Leadership comes in multiple shapes and sizes, then so too does influence. When the honey eyed stare of a large lioness causes Land Cruisers to part like the Red Sea under Moses’ instruction, we are physically, emotionally and maybe even spiritually moved. Without a single sound.

And when a gecko drops in on a conference conversation pandemonium ensues as tables and chairs scatter, drinks are spilled and fully grown men and women spread as if flung from an overturned vehicle at high speed.

Imagine the family talk at the Gecko’s household that evening?

“How did you cause all that panic Dad? You left a wake of destruction, escaped capture and no one slept through Mick’s lecture – How did you do all that?”

“I’m not sure my boy, I dropped in on a conversation and I was just being myself.”

He (or She?) was not trying to be a lion or an elephant or even a snake. Just a gecko being simply a gecko.

Authentic Leadership is what moves followers to alter the course of the moment. Gandhi shifted a nation and geckos shift furniture. A look from a lion levers Land Cruisers and children change mindsets. A young female leopard stops the clock of our measured world while she laps up water while her impossibly long whiskers dance in dryness and the gently raised hand of a Ranger refashions the route of the largest of all land mammals.

We influence through who we are being. And perhaps in that we are indeed equipotent.

Sarvodaya – “well being for all.”