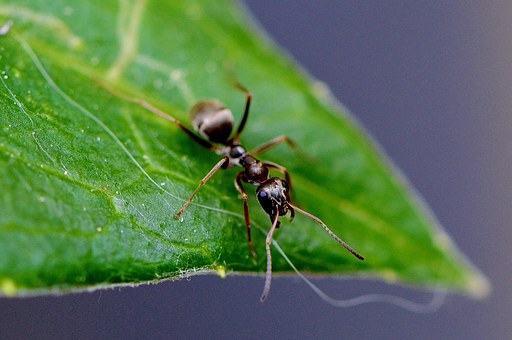 I was reading a little about ants, and I learned a lot about nature – possibly even Human nature !

According to Mark Carwardine in his book “Extreme Nature”, it is estimated that ants make up 15% of the planets total biomass, with biomass being the mass of all living matter in a given geographic region. If that region means the whole planet, then the mass of all living organisms must be quite substantial, and in that context, that would relate to a lot of ants. Think about it for a second. All the world’s living matter makes up the rest.

The huge herds of elephants in the Kruger, the Chobe and the Selous, the rafts of heavy hippos lazing along the banks of the Zambezi, not to mention the magnificent migration of over a million moving mammals between the Masai Mara and the Serngeti.

Think of the great journeys of giraffe and dazzles of zebra, elegant eland and bold buffalo, and then think of all they eat – the grasses, the leaves and fruits, the seeds the bark and the roots. Then think about all they don’t eat – from fynbos to forests. Add to that over 6 billion of us, all our veggies, chicken, livestock and our precious gardens, and we’re talking some big numbers. An enormous 15% of all of that mass is made up of the hard working, humble ant. If ever there was a living example of a kind of a fractal, maybe the ant is it!

Why are ants arguably the most successful animals on earth? Apparently it is all due to cooperation. The big picture of the superorganism remains paramount. The survival of the species is more important than the single, Individuality is often sacrificed to benefit the community, and roles are assumed by individuals to help facilitate this process.

There is one particular species of ant which seems to be dominating the superorganism category. In boxing parlance, and by their sheer numbers we might call them the heavyweights – yet like all fractals, they had modest beginnings.

Over a hundred years ago the Argentine ant (linepithema humile) stowed away among plant material being  exported on boats from South America. Their numbers then were no more than a couple of handfuls. Today they are found in six continents with millions of colonies each comprising billions of ants. One such supercolony can be found running a length of over 6000 kilometers from Northern Italy to Northern Spain. If you’re watching the Tour de France, that’s nearly twice its length, or from Cape Town to Jo’burg and back….twice !

This supercolony is made up of millions of genetically related and interconnected nests, and the reasons for its success seem to be twofold,

their ability to breed fast, and maybe most importantly, peace. They don’t bother fighting each other, unlike the nests of other native ant populations. Naturally the time wasted in fighting is saved for food gathering, making more ants which must be fun, and defence against external threats, or real enemies.

There is a lesson here. Fractals can start small and can grow big. If there is a willingness to give life to an idea quickly, it can spread quickly, and performance is enhanced when it is permeated by peace.

If the insignific-ant can do it, what is stopping us ?