To be passionately curious 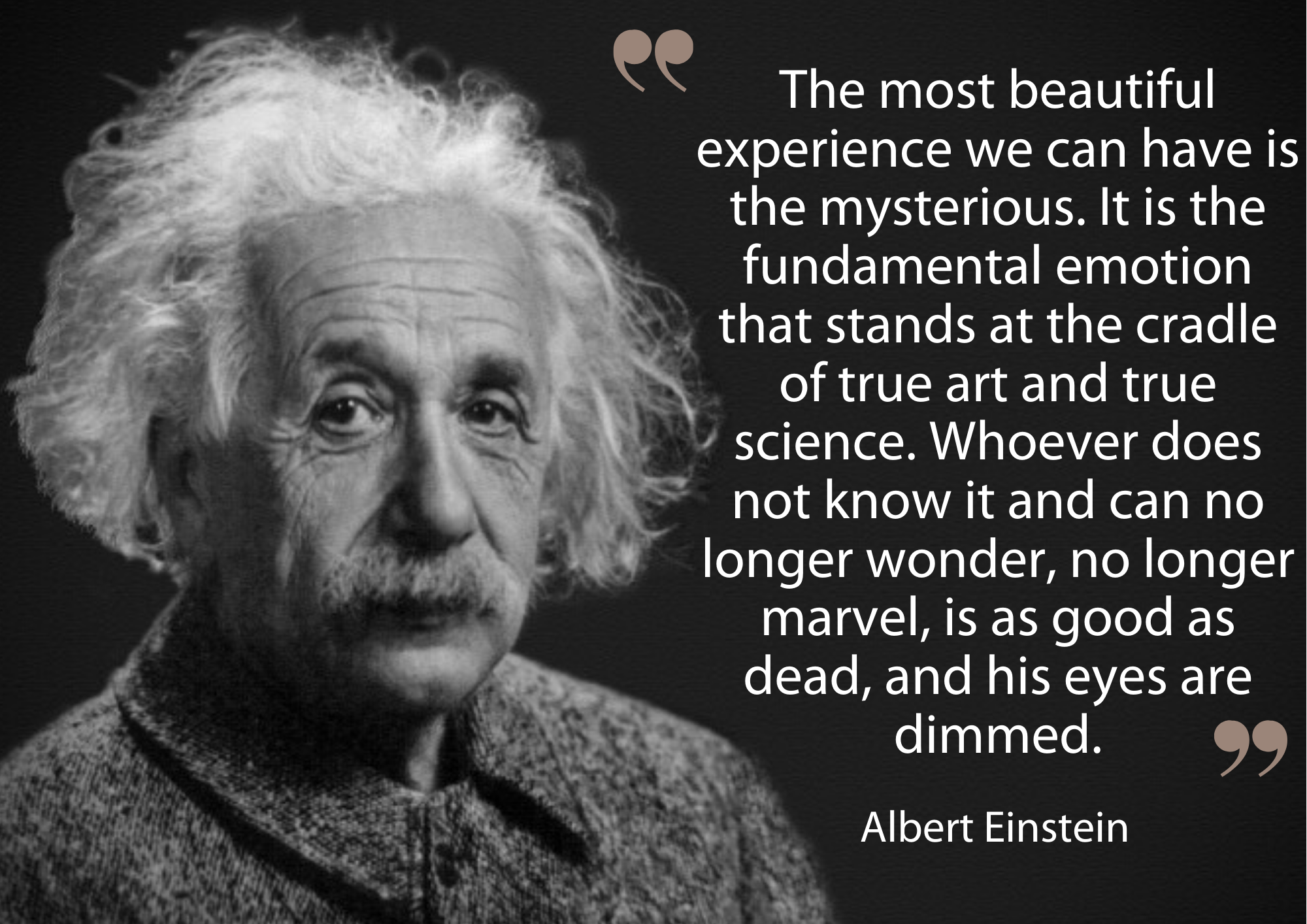 At the tender age of between four and five, Albert Einstein sat mesmerised as he observed the needle of a compass respond to the Earth’s magnetic field. It switched him onto science and taught him a lesson about nature which he never forgot. It caused him to remark some years later that:

“There must be something behind things, something deeply hidden.”

Ever since the day his Father stopped long enough to share some time and gently influence his son, one of the world’s greatest minds never stopped questioning the world around him. The world has been left infinitely richer by his thinking, and his humility. He commented:

“I have no special talent. I am only passionately curious.”

Along our journey we have learned much from this brilliant mind who seems to be as much a scientist as a philosopher, and is perhaps one of the great examples of a whole brain thinker. With Einstein as an inspiration, the invitation is to remain curious, and to really search for that “something” which lies behind things and which may be deeply hidden.

While the British were stretched in a full scale military operation with the Zulus in the Anglo-Zulu wars of 1879, March the 14th heralded the day of Einstein’s birth. This anti – war activist and passionate humanitarian would emerge from his shell to argue for the protection of human rights around the world. He was even offered the presidency of Israel, but famously turned it down. He is of course known for his formula of E=MC2(squared), but perhaps on this occasion he lived by one of his lesser known and maybe more frivolous formulas:

So, how else can you sum up a man who has won just about every award possible, who nearly 60 years after his death is still a household name and whose equations on the expanding Universe were confirmed some Ninety years later by the technology of the Hubble telescope. A man who loved to sail, yet couldn’t swim, who despised wearing socks and who might have been a musician had he not been a scientist. How do you explain the paradox of the greatest mind of all time and someone who has inspired scientists and philosophers in the same way as Gandhi inspired Leaders, failing his University entrance exam and only speaking at a late age in his life?

Perhaps it is to use a few of his very own carefully selected words.

“Learn from yesterday, live for today, hope for tomorrow and never stop questioning.”

In what is arguably one of Albert Einstein’s simplest yet most profound essays entitled “The world as I see it”, he writes:

“The most beautiful experience we can have is the mysterious. It is the fundamental emotion that stands at the cradle of true art and true science. Whoever does not know it and can no longer wonder, no longer marvel, is as good as dead, and his eyes are dimmed.”

So, enjoy the frustration of not knowing the answer and climb with us into the crucible of questioning and if it’s any consolation, this great man who led with both humanity and humility would probably be observing from behind his bushy eyebrows and electric shock of hair saying that whatever you came up with is entirely relative.

We hope that while you are here you will find the Space and take the Time to let your own Light shine, and in so doing will raise the level of your own Energy and that of those around you. Maybe you will indulge for a while to forget about that which can be counted and focus on those who count. Yourself included.

You guessed it – Einstein again.

Albert Einstein died in Princeton hospital on the 18th April 1955. The night before his passing he refused surgery saying:

“I have done my share. It is time to go. I will do it elegantly.”

Indeed. In life as in death.

Steve Hall is a Lead with Humanity Associate.   His passion is to understand ‘human energy’ and how it has the possibility to fuel exceptional performance at the individual and team level.  Visit Steve Hall’s Vlog here.

A reflection on a VUCA world