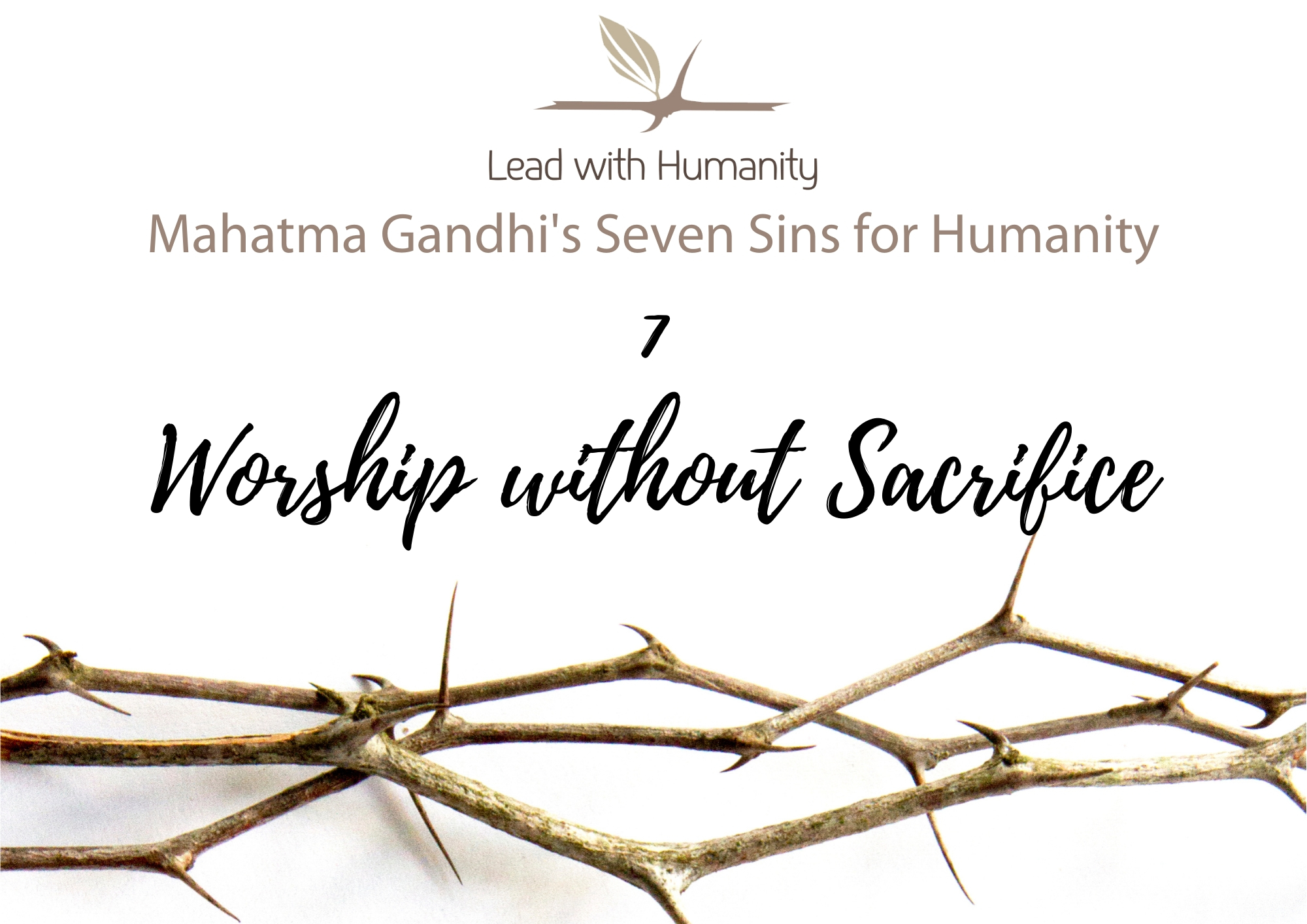 There is an old saying that goes;

“Who you are being speaks so loudly, that I can’t hear a word you are saying”.

Actions have always spoken louder than words.  This timeless lesson is truly relevant when exploring the actions of worship, in all its various forms.

Mahatma Gandhi warned humanity against the sin of worship without sacrifice.  So, what do our actions suggest about what we really worship?

There is no doubt that when Gandhi first shared his seven deadly sins in 1925 he intended this particular one as a message to religious or faith-based groups. As his grandson Arun later shared: “In the name of God, religious groups have spawned more hate and violence than any government. True religion is based on love, compassion and appreciation of each other whatever our beliefs may be.”

Worship is commonly associated with an of sacrifice for a Higher Being. Sacrifice requires giving up of ourselves and giving our love and adoration. It is associated with what we are willing to let go of, or what we are willing to stop or start doing to demonstrate our devotion.  It is one thing to go through sacrificial rituals, but an entirely different thing to demonstrate our sacrifice openly.

The word worship has far broader connotations than religious or faith-based ceremonies.  For example, it is also interpreted as adoration, infatuation, idolatry, or deep reverence, all of which give a greater understanding to the importance of worship.

All of us are prepared to sacrifice for something or someone we truly ‘worship’.  However, is what we truly worship on the inside, the same as what we say we worship. Often, our deepest desires tend to emerge without us even realising it.

Yes, people sacrifice much in the name of worship.

Sadly, many people sacrifice themselves in pursuit of what they think they ought to worship. They revere their career or their job titles or salary, rather than who they are and who they are meant to be.

Stephen Covey, in his book “Principle-Centered Leadership” is bold in his views on this in a Christian context:

“Without sacrifice we become active in a church but remain inactive in its gospel. In other words, we go for the social facade of religion and the piety of religious practices. There is no real walking with people or going the second mile or trying to deal with our social problems that may eventually undo our economic system. It takes sacrifice to serve the needs of other people – the sacrifice of our own pride and prejudice, among other things.” (Covey, 1992)

“One person’s faith is another person’s fantasy because religion has been reduced to meaningless rituals practiced mindlessly.”

Gandhi believed whatever labels we put on our faith, ultimately all of us worship truth.  He said that ‘Truth is God’. We may be very devout believers and make a tremendous public show of our worship, but if that belief, compassion, love and appreciation is not translated into who we are being in our lives, our prayers will have no meaning.

True worship demands sacrifice not just in terms of the number of times a day we say our prayers but in how sincerely we translate those prayers into our lifestyles.

These words of wisdom apply to all religions of the world, including atheism and Agnosticism.

We should think deeply about what it is that we really worship.  Are we truly honest with ourselves or do we present a façade of what we say we worship? Do we intentionally sacrifice for what we choose to worship?

Yes, indeed.  Who you are being speaks so loudly we can’t here a word you are saying.

Pete Laburn, founder of Lead with Humanity, is a catalyst for positive and enduring change.  For the past 30 years he has worked with organisations and leaders to assist them to understand their purpose, see possibilities, craft bold, forward-thinking strategies and enhance their leadership effectiveness.

Leadership is about Giving