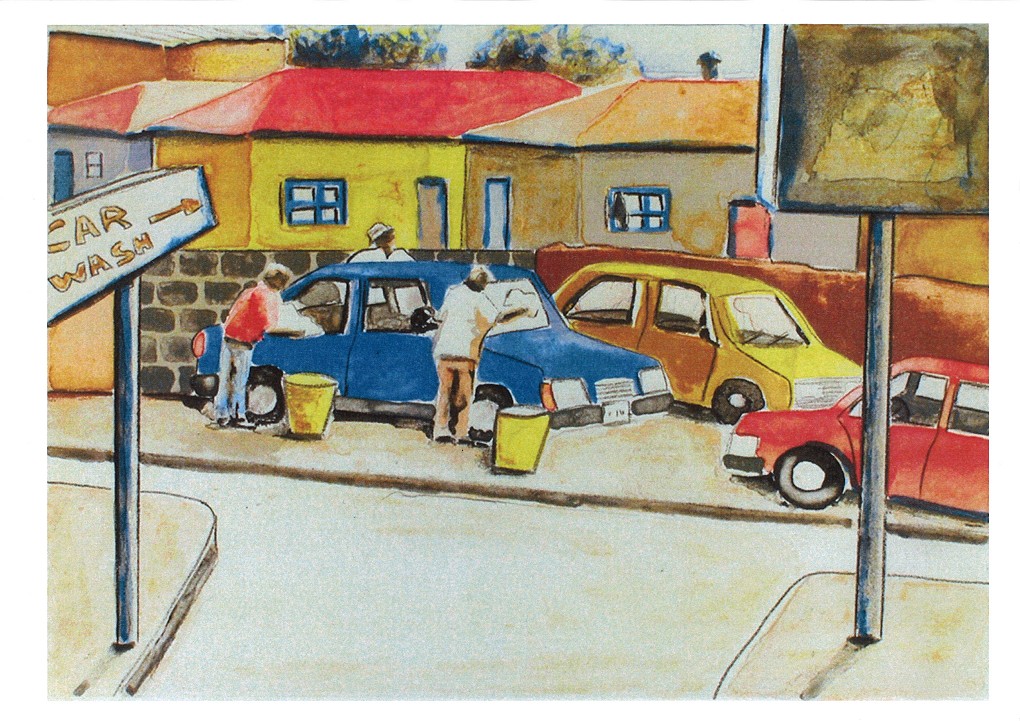 Just like Leadership comes in multiple shapes and forms, so too do many seemingly menial things like a simple carwash. In the smart and sublime suburbs of Sandton, they may be fully automated with a Seattle coffee thrown in as part of the deal. Housewives may have enough time to get another layer of lacquer applied to their impatiently tapping talons, while Househusbands run in to get milk, bread and a catch up on WhatsApp.

At shopping centers there are many more mobile and manual operators who walk in their wellies and talk with their toolkits as they solicit a shine with their smiles or pocket a price with a polish. At golf clubs, an out of bag caddie may offer his services as a carwash, and even at traffic lights, there will often be someone who steps out of the shadows with an old rag and a seriously diluted bottle of Sunlight soap to clean a windscreen. The end result of this is usually not so much a cleaner visage, but rather a more thinly spread veneer of city smog or ghetto grease. You can guarantee that as you drive through any of the former townships in South Africa, from Soweto to Sea Vista or Tembisa to Thokoza, you will find as many carwashes as you will find hair salons and cell phone outlets. Connectivity, fashion and clean cars are as common in Kwa Thema as they are in Khayalitsha and whether in Ga-Rankuwa or Gugulethu or from Duncan Village to Diepsloot, there is always an opportunity to pamper yourself or pimp your ride. It appears that appearances matter no matter where you live.

Here in F Section of Kwa Mashu, just North West from Durban, there is a social hub with a liquor outlet and enough shaded seating to savour a shared swig from a big bottle of cold beer, or sip from a ‘cell phone’ – the original half brick sized, mobile shaped, half jack filled with one’s favoured flavour which makes one talk! Naturally there is a beauty palour offering unnatural hair extensions, a spaza shop selling an eclectic collection of consumables, and around the perimeter, fires are lit in half cut forty four gallon steel drums for any desire to self cater. It seems as though the invitation is simple.

Bring it or buy it, as long as you braai it. Sit for a while and eat, or take it with you down the street.

Not too many rules.

The dress code is equally comfortable. Most shirts are worn unbuttoned if worn at all, and being barefoot is as acceptable as the stepping out of some ‘shiny shoes’ as a passing wedding party pulls in for cigarettes to settle the senses or to arrange a post wedding date.

Here, children play never ending games with limited resources, and their imagination never needs to be recharged or reignited with a software upgrade. There is hardly a stern word from any adult authority, and supervision is superfluous.

In amongst all of this there also happens to be a carwash.

Music of all descriptions tumbles from open trunks and beats from boots. Jazz jumps in from a JBL speaker, Rhythm and Blues meets Reggae, Soul slides in from a Citroën, Rap keeps knocking and there is nothing quiet about Kwaito. Whitney Houston is alive and well as she continues to serenade us all as wannabe bodyguards in her proclamation of “I will always love you.”

That was the song playing loudest at the moment the driver of the wedding party winked at a freshly extended young hairstyle adorning a knowing smile. In fact, we were sure his conversation went something like this:

“I have nothing, but I wanna dance with somebody. Give me one moment in time, I will run to you, and show you the greatest love of all.”

His entire pick up line summed up in Whitney’s song titles. Whether she picked this up or not, her return wink was convincing. Genius comes in multiple shapes and forms too.

I only hoped that the next morning he wouldn’t have to ask the painful post party questions of:

“Didn’t we almost have it all, and where do broken hearts go?”

I have digressed. It is what a carwash of this nature does to one.

Extraordinary places attract extraordinary characters, and across the carwash came a question so golden that it matched the gold teeth from which it intimidatingly emanated.

From the moment Humanity stepped out of the cave and started to climb the ladder of Maslow’s hierarchy of needs towards the apex of self actualization, we have been held limited and liberated by this question. Everybody from poets to play writes to priests, from Philosophers to philanthropists, sages to psychologists, coaches, consultants, Hypnotists, healers and helpers – have all asked it in various guises. It has been weaved through the very fabric of fellowships, stitches of society and tapestry of tribes. Who we are cuts through the constricting cloth of culture, the organograms of organisations, the row of race and rhetoric of religion.

The Oracle of Delphi advised: “Know Thyself”, and Shakespeare continued some three thousand years later: “This above all: to thine own self be true…”

The Rabbi Abraham Twerski was once complimented for having written over fifty books. His humble response was that perhaps he had only written one book, but in over fifty different ways. The bulk of his work was around self esteem, and one way he explored this was through a similar sort of question: “Without a job, Who are you?”

He describes self esteem quite beautifully as “the true and accurate awareness of one’s skills, capabilities and limitations.”

On our Leading with Humanity experiences, we try hard to create a space for people to dig deep to find their roots, and there is a life’s work to be done just with Twerski’s description. The search of course never ends as we try to define ourselves away from attachments and closer to our cores, but every now and then a question from a carwash kind of place might remind us that we’re are always on a journey in a constantly changing context.

What was our response in that moment?

Varied. As different as we all are as individual pilgrims.

But right there, in the cauldron of a Kwa Mashu carwash with its camaraderie and conviviality we heard the challenge and I think we found a little more of what we were looking for.

A golden question if ever there was one.