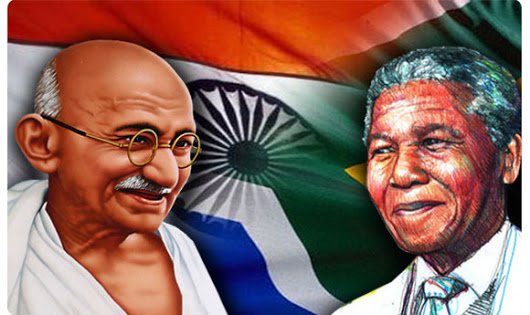 This year is a significant one in South African history. It is Nelson Mandela’s birth centenary. Coincidentally, it also marks the 125th anniversary of Mahatma Gandhi being thrown off a train at the Pietermaritzburg Railway Station for refusing to give up his seat in a first class, “whites-only” compartment.

To the world, the connection between the two great men is more than just this fortuitous coincidence. For many, Mandela is a modern Gandhi, because Gandhi’s way of thinking and acting found an echo in how Nelson Mandela resisted and fought apartheid for the equality of black South Africans. It won’t be surprising if, during Mandela’s centenary celebrations, attempts are also made to paint poignant similarities between Gandhi and him.

But that’s not the purpose of this article. I’d like to focus on something more fundamental –to ask a question: What are a few lessons the world of leadership, which is underperforming and experiencing a variety of manmade crises, could learn from these two great men to make the world a better place?

In answering the preceding question, I would like to focus on three aspects: one shared by both Mahatma Gandhi and Nelson Mandela, one that was uniquely Gandhi, and one that was distinctly Mandela.

In my most recent book, Awakening A Leader’s Soul: Learnings Through Immortal Poems, I introduce a new human-centric leadership narrative, called soulful leadership, which reimagines leadership’s purpose and states that the most potent asset of leaders is not their Machiavellianism, their political dexterity or their social shrewdness, but their humanity — their essence, who they are, what they stand for, what they are willing to fight for. Both Gandhi and Mandela were soulful leaders who led with their humanity. There was never any doubt — not even in the minds of their worst critics (not everyone saw eye-to-eye with them) — as to what they stood for and what they were willing to fight for … even die for. Never. Which is why they were able to influence staggering change and achieve awe-inspiring results.

My book begins with a plaintive thought by Sophocles: “How can anyone’s welfare depend on anyone such as I am?” Unfortunately, there is an abundance of shifty and cagey leaders in today’s world. Which is why we — everyday people and citizens — can’t depend on them for our welfare and prosperity. That’s why the world needs more soulful leaders who are willing to lead with their humanity, like Gandhi and Mandela, so it can be a better place. Today’s leaders can take a giant leap toward leading with their humanity if they strive for at least the following outcomes:

Gandhi practiced what he preached. He was not about appearances, image or how he was perceived — he was about all about conviction and action. In his poem, “The Hollow Men,” T.S. Eliot exposes those who spend a lifetime seeming and appearing: “… between the emotion and response, falls the shadow.” No shadows marred the transition from ideas to action in Mahatma Gandhi’s case. His leadership was characterized by a oneness between his beliefs and his actions, between his walk and his talk.

The world would be a significantly better place if more leaders emulated this one aspect of Mahatma Gandhi’s leadership. Today’s leadership practitioners and teachers are besotted with claiming “authenticity.” If only they were equally zealous about acting on it — practicing it. They can achieve greater authenticity if they intensify their efforts to achieve clarity of vision and marry their passion with a larger purpose — a purpose that increases the wellbeing and prosperity for all, not just for a privileged and powerful few.

Mandela persevered and was self-reliant through 27 long years of imprisonment. He lived William Henley’s poem, Invictus, “I am the master of my fate, I am the captain of my soul.” It would have been the easiest thing for him to have blamed and pointed fingers at circumstances or at his white oppressors. If today’s leaders are to truly make the world a better place, they can do well by emulating this aspect of Mandela’s leadership legacy. Because, bandying jargon like “ownership,” and “accountability,” while making a living by pointing fingers and hurling blame, is making a mockery of leadership’s purpose.

Both Mahatma Gandhi and Nelson Mandela are soulful leaders — giants worthy of our admiration and praise. But wouldn’t it benefit our wellbeing and prosperity more, if rather than merely praising them, we were to recommit and renew our resolve to emulating a single aspect of their leadership legacies? Just one. Even if a fraction of us did it, the world would be a better place. And my intuition tells me they both would approve and enjoy that more than having praise heaped on them.

Previous The Power of Resilience
Next Six Keys to Transcendent Leadership.

10 Ways to Create Diversity & Transformation in the Workplace